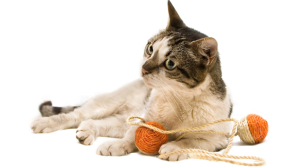 We’ve all been there. Your best friend’s cat has been the talk of the party because it looks just so adorable chasing its little fur mouse all over the lounge in front of everyone, so you rush out and buy one for the feline in your life – almost the same, but even better (naturally), because you can wind it up and then it runs across the floor making irresistible little squeaking noises, too! You rush home and present your weetheart with her new robotic companion. As it whizzes around your feet squeaking like a WW2 aeroplane with rusted propellers, you get a look that says, “Listen, if you want an animal to congratulate you for buying stupid things, get a dog, okay?” and the cat you’ve so desperately wanted to impress turns over on the couch to sun her other flank. We love our cats because they’re discerning creatures, but how can you recover from this crushing blow and get your shopping style up to scratch? Here are a few feline tips to smart shopping.

When shopping, think like a cat. Cats have a limited capacity for colour vision, with most colours being fairly blurred shades of pastel in daylight, so intricate patterns are likely to go unnoticed. Choose toys with uniform or solid colours for best effect. Also remember that cats are very sensitive to noise, but very few cats can resist the sound of shopping bags rustling. As a rule,dogs prefer squeaks and cats prefer quieter toys. Texture under their paws and in their mouths is also important to cats, so a toy with some rough and some smooth surfaces may be more interesting than one with only one texture.

On The Other Paw …

Some cats, like some humans, are ambidextrous, but the vast majority of cats have a preference for either swatting ground-based objects (the mouse hunters) or air-based objects (the moth hunters). If your cat tends towards the latter category, invest in toys on strings that can dangle or fly rather than toys that just lie around. While on the topic of toys that lie around, remember that cats are very much like human children. The most interesting toy can become boring if it’s always there. Leave only one or two toys out constantly, but rotate the rest. Last week’s toy can be as good as a new one!

I have it on good authority from a very discerning cat that they’ll still love us if we can’t afford to buy them designer toys! Functionality is the key to a good toy. A little ball with feathers on, for example, looks nothing like a mouse when it’s rolled across the floor, but it moves like one! A cat that pounces on a toy bird on a string will play just as well with a little piece of crumpled paper tied to the end of a string. Anything light enough to move when a cat swats is likely to get attention, but remember that specially designed cat toys were designed for safety, whereas a chocolate wrapper was not. Using home-made toys can be huge fun for humans and cats alike, but don’t let your cat play with them unattended. Leave only bought cat toys out when you are not around.

Don’t Forget: You Can’t Order  A Cat Around!

This is why we like them, isn’t it? Have a careful look at the colours, games, sounds and textures that your cat prefers and stick to these when buying or making toys for your companion. And don’t despair if a few offerings are refused. I can guarantee that all of our feline best friends have at least one really expensive mechanical flying toy lying unused in the cupboard …!